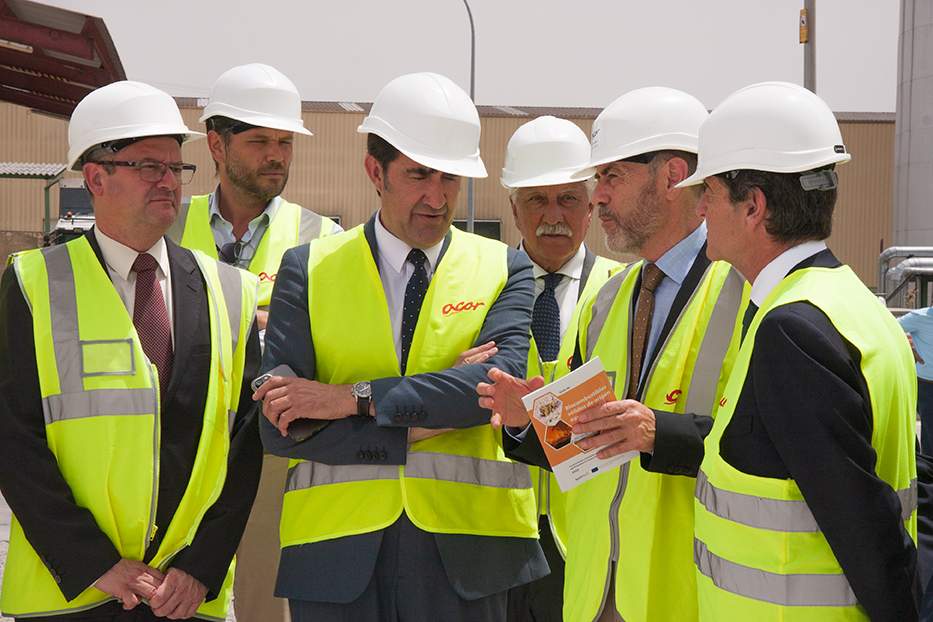 ENSO will invest 70 million euros in the construction of the largest biomass cogeneration plant in Spain and will manage it under the modality of energy services for the agricultural cooperative ACOR. The plant will cover all your process steam and electricity needs, increasing your competitiveness and allowing you to advance in your decarbonization process.

On June 14, the project was presented in an official ceremony at the ACOR facilities in Olmedo, Valladolid, chaired by Jesús Posadas, president of ACOR, and attended by Mario Armero, president of ENSO; Elías Hernández, CEO of ENSO; the Regional Ministers for the Environment and Agriculture of Castilla y León, Juan Carlos Suárez-Quiñones and Gerardo Dueñas; and the Deputy Minister of Economy, Carlos Martín Tobalina.

The investment will be around 70 million euros and has the collaboration of the Castilla and leon meetingthrough the public company Somacil, attached to the Ministry of the Environment, Housing and Territory Planning.

The president of AVEBIOM, Javier Díaz, is sure that “this project is going to be a milestone for the energy recovery of biomass in agribusiness; a spearhead to encourage other companies to abandon fossil fuels for a local, abundant and reliable source of energy that allows full decarbonization in a profitable way”.

Construction of the biomass cogeneration plant will begin in early 2023 on ACOR land adjacent to its beet processing facilities. It will have 80 MWt of power and will produce 346.000 tons of reheated process steam and 45.000 MWh of electrical energy for self-consumption per year. The plant will give direct work to 30 people and indirect work to another 60, related to the supply of biomass.

The plant will consume 90.000 tons per year of forest biomass of sustainable origin certified under the European SURE scheme and will avoid the emission of 60.000 tons per year of CO2. In the future, the members of the cooperative could provide part of the biomass used as biofuel and also use the combustion ashes as fertilizer on their farms.

Elías Hernández, CEO of ENSO, estimated that, with the current price of natural gas, the biomass plant would allow ACOR to save 60% on its energy bill.

Jesús Posadas, president of ACOR, clarified that, although the announcement of its construction coincides with a crucial moment in the energy sector in Europe and also in Spain, the plant was already foreseen in the strategic plan of the agricultural cooperative two years ago to reduce the costs for the emission rights of its industrial activity and increase its competitiveness. Posadas thanked the involvement of the three ministries of the Junta de Castilla y León in this project.

The president of ENSO, Mario Armero, pointed out that having access to affordable, independent of external conflicts and green energy is a competitive advantage for companies, and encouraged greater public-private collaboration to promote more projects such as ACOR's. In his opinion, Castilla y León is an attractive region to invest in energy.

The Minister of Agriculture and the Deputy Minister of Economy highlighted the strategic importance of agribusiness in Castilla y León and assured that the Board is committed to improving its competitiveness and "making the economy circulate". For his part, the Minister for the Environment pointed out that ACOR is a worldwide example of environmental commitment and competitiveness in agribusiness and reviewed the advantages of biomass as a source of energy: autochthonous, non-relocatable, renewable, creator of rural employment and population fixer. Lastly, he stressed the Board's commitment to expanding the use of biomass in urban heat networks.

Related exhibitors
Our Exhibitors
More than 500 exhibitors will present the latest developments, products and technologies available in the international market.
Know them
Noticias relacionadas
TERMOSUN participates in an artificial intelligence project to optimize the combustion of BIOMASS
The keys to Expobiomasa 2023
ENSO and GARCÍA-CARRÍÓN promote a new thermal generation project of 10.000 tons of biomass