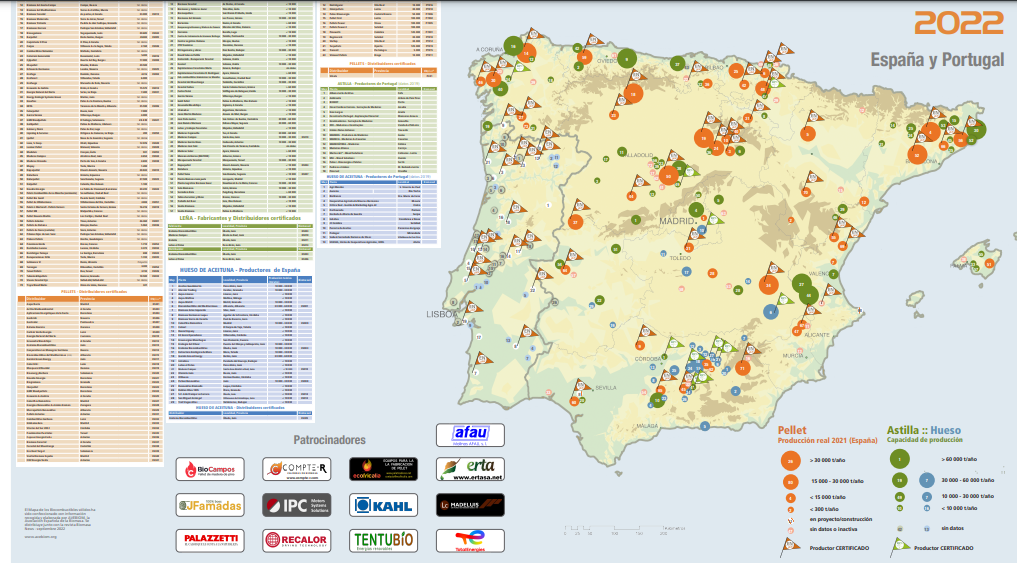 163 solid biofuel manufacturing centers with the capacity to manufacture millions of tons of pellets, chips and bone each year and guarantee the supply of renewable energy throughout the country

It also offers information on the 35 ENplus® certified pellet distributors and, for the first time, on BIOmasud® certified firewood manufacturers and distributors. On the other hand, it includes data from the 54 pellet, chip and bone centers in Portugal.

All the autonomous communities, except the Canary Islands and the cities of Ceuta and Melilla, have a pellet plant. The 83 factories inventoried by AVEBIOM in April 2020 are distributed throughout 31 provinces of the 50 that make up the Spanish State. And between all of them they add a theoretical production capacity close to 2.000.000 tons per year.

“For the remainder of the season, the pellet factories in Spain have committed to guaranteeing the supply of pellets to their national customers and hardly any pellets are exported to other countries. Certainly, depending on how winter behaves, there may be tensions and, at any given time, in a specific area, there may be longer delivery times than usual, but there will be pellets and also other solid biofuels such as chips, firewood and olive pits. ”, According to Paul Rodero, current president of the European Pellet Council and responsible for the ENplus® certification in Spain.

In 2021, seventeen plants manufactured more than 10.000 tons of pellets, placing more than 465.000 tons on the market. All of them, except one, are ENplus® certified and are located in the northern half of the peninsula, with the exception of two, which are located in Albacete and Granada.

Another 29 plants have declared productions of less than 10.000 tons and manufactured just over 78.500 tons. Finally, 27 factories did not provide their production data for 2021.

Currently, there are 37 plants and 39 distribution companies with active certificates in the quality seal ENplus®.

As for chip production, AVEBIOM has inventoried 57 plants in Spain, two fewer than in 2021. However, total capacity is increasing thanks to the fact that there are now six producers, two more than last year, who have the capacity to produce more than 60.000 tons of chips per year, located in Asturias, A Coruña, Valencia, Girona and Barcelona. And, in addition, one more producer joins those with a capacity greater than 30.000 t/year. The rest

On the other hand, 29 plants where olive pits are obtained have been inventoried, four more than in 2021; the largest producers are in Jaén, Albacete and Madrid, with productions of over 10.000 tons per year. Three manufacturers have been certified BIOmasud® in 2021 and there are already seven plants and one distributor.

Also in the last year the first 4 firewood producing companies have been certified. The inclusion of wood heating equipment among the government subsidized schemes, as long as a maximum humidity of 20% is guaranteed, it can be an incentive for more firewood producers to be encouraged to be certified in BIOmasud®

For Portugal, the information on the previous map is maintained, prepared with data provided by the Association of Madeira and Furniture Industries of Portugal.

Related exhibitors
Our Exhibitors
More than 500 exhibitors will present the latest developments, products and technologies available in the international market.
Know them
Noticias relacionadas
The VAT of 5 percent is maintained for SOLID BIOFUELS of wood until the end of 2023
PELLET production increases by 20 percent in Spain.
Pellet consumption in Europe grew by 18 percent in 2021