How clean is electricity generation in Europe? 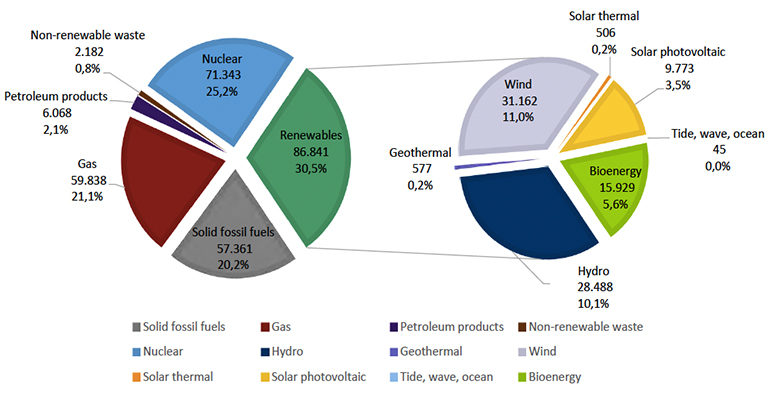 Currently, 30% of European electricity is generated from renewable energy sources. However, during the last decade, the contribution of renewable energies to the electricity mix has increased considerably, but it is mainly due to variable renewable sources, such as wind and solar. Biomass provides an alternative solution to generate clean electricity in a flexible and manageable way to complement other renewable sources more dependent on the current weather conditions, according to a new report by Bioenergy Europe. The graph shows how the gross generation of electricity by type of product in EU28 in 2017 (in ktep) according to Eurostat, and reflects that biomass contributes 5,6% of electricity.

Despite the fact that in the past 20 years, Europe has gradually reduced the contribution of oil and coal to the production of electricity, fossil gas has doubled in the same period. According to the last Report on bioelectricity published this year by Bioenergy Europe, the 43,4% of the electricity generated in the EU-28 is still produced with fossil fuels, mainly gas and coal, causing the emissions that negatively affect the Climate Change situation.

Noticias relacionadas
Make the internet a greener place with biomass
The Croatian people of bioenergy
Manufacture of paper products with neutral CO2 emissions
Related exhibitors
Our Exhibitors
More than 500 exhibitors will present the latest developments, products and technologies available in the international market.
Know them