It is time to think about switching to biomass. 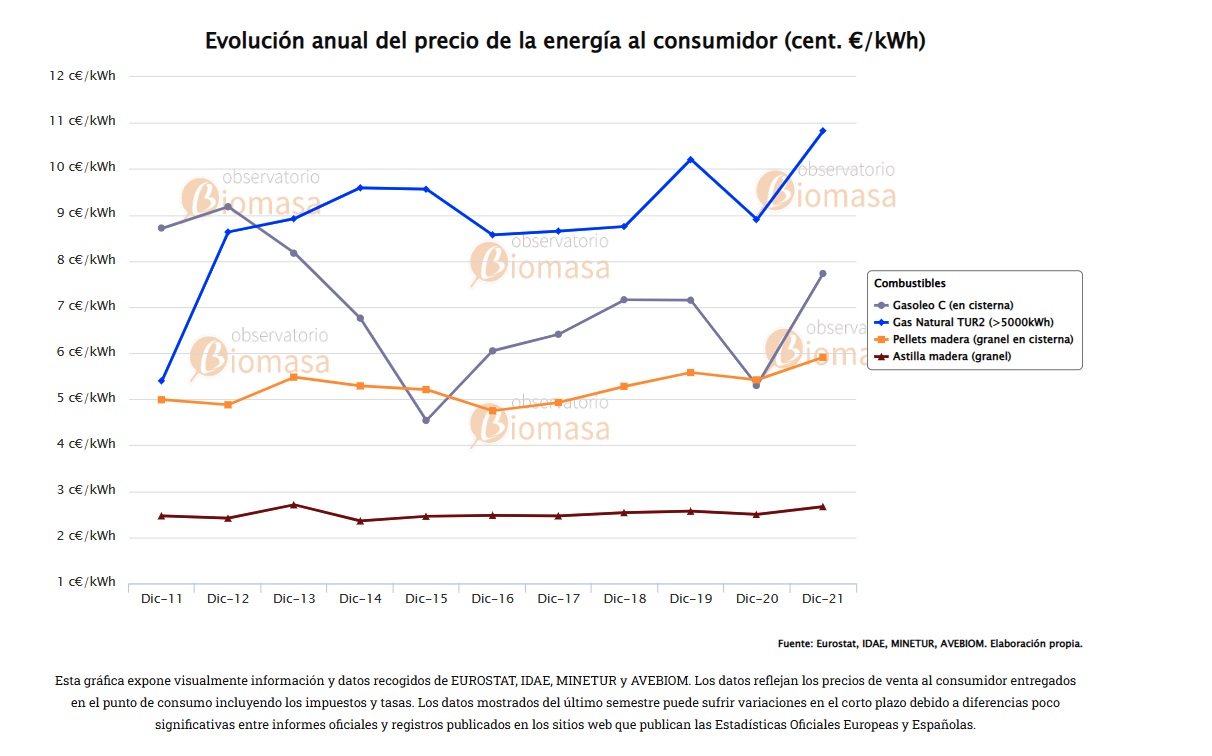 Haven't you thought about it for your home, neighborhood community or business yet?

EUROSTAT publishes the average prices that consumers in Spain have paid, taxes included, for energy in December 2021, before the price escalation caused by the war in Ukraine. Electricity had already risen 23% during 2021, gas 22% and heating oil 46%. Few experts in the sector believe that the problems of gas and diesel supply will not become more pronounced and prolonged over time with restrictive policies in the coming years throughout Europe, both economic and environmental.

Stability of biomass prices and savings.

Using biomass to generate heat has two fundamental advantages from an economic point of view, in addition to the energy independence it provides.

The first one is price stability over the years and despite the fact that the number of biomass consumers grows by more than 20% each year, increasing demand. In other words, prices have remained very stable over the last 10 years, although it is also true that we are going to see an increase in the coming months due to the increase in transportation and manufacturing costs.

The second is savings by substituting fossil fuels such as heating oil, being able to amortize the investment in a very short time. And it is that the price of heating oil has just broken a record a few days ago in Spain, costing an average of 1,39 euros per liter, 70% more expensive than December. Today generate heat with pellets cost less than half to do it with gas or diesel, and generating heat in a forest chip boiler costs a quarter of what to do with fossil fuels. The price difference has widened.

The sixth report of the Intergovernmental Panel on Climate Change (IPCC) has just been published, indicating that in order to achieve compliance with the temperature limits of the Paris Agreement, urgent and ambitious action is needed at all scales, in addition to a deep social and industrial transformation towards a development with low greenhouse gas emissions.

Limiting global warming to 1,5°C is almost inevitable, the new report concludes, but it could be reduced below the critical level by the end of this century. To do this, it is required that global greenhouse gas emissions reach their peak before 2025 so that they are then reduced by 43% before 2030 and up to 84% in 2050. To meet this goal, it is estimated that the use global gas will have to have been reduced by 70% compared to 2019.

Forum on Forests and Climate Change

Related exhibitors
Our Exhibitors
More than 500 exhibitors will present the latest developments, products and technologies available in the international market.
Know them
Noticias relacionadas
ENSO AND ACOR present the largest biomass cogeneration project in Spain
GALIFOREST ABANCA arrives, the forestry fair of Galicia
26.000 foresters visit the last edition of ELMIA WOOD in Sweden