Horizon +, SUGIMAT's new self-cleaning rotary boiler for solid waste will be at Expobiomasa 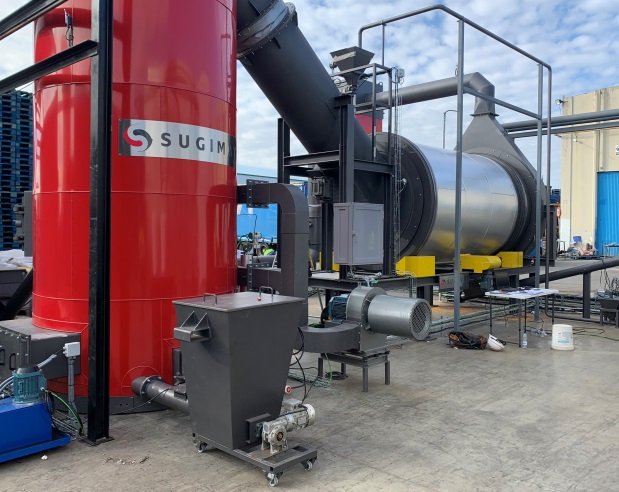 Horizon + is the new boiler concept developed and patented by Sugimat after several years of R&D work. It is based on a self-cleaning rotary boiler that effectively combats fouling and the formation of deposits inside.

The operating principle is based on the rotation of the boiler that causes the ash to slide between the smoke passages of the same until it is evacuated. In addition, the equipment is equipped with an aggregate injection system that guarantees the release of deposits adhering to the tubes, a common phenomenon in fuels with high alkaline content.

This revolutionary boiler concept has some advantages over conventional cleaning systems:

Application, use and recipients

Today, the problems of fouling and corrosion in boilers and heat exchangers are one of the main problems when it comes to recovering solid biofuels. Waste such as olive pomace, pruning, bark or chicken manure are examples of biofuels with a high calorific value that makes them theoretically recoverable, but which nevertheless contain high rates of non-burning (between 10 and 40%), in addition to compounds chemicals that cause deposits on heat exchange bodies. This leads to a significant decrease in the performance of the equipment, the obstruction of smoke passages and corrosion. Until now, this problem has been confronted through the installation of continuous cleaning systems that, although they allow the availability of the equipment, do not guarantee that the performance of the equipment and, therefore, its energy efficiency, will remain stable over time. of operation. In addition, it does not prevent the formation of deposits in the exchange bodies, forcing stops for cleaning when the performance is diminished.

The Horizon + is intended for users of boilers fed any type of solid waste, given the energy savings that it entails, even in fuels with a low amount of non-burnables, it represents an added value to their production process. The boiler is manufactured in ranges of up to 12 MW of power and can be adapted to different combustion systems.

Noticias relacionadas
Produce feed efficiently thanks to biomass
Now is the time to think about switching to biomass
Caldes de Montbui (Barcelona) already has a second forest biomass boiler
Related exhibitors
Our Exhibitors
More than 500 exhibitors will present the latest developments, products and technologies available in the international market.
Know them