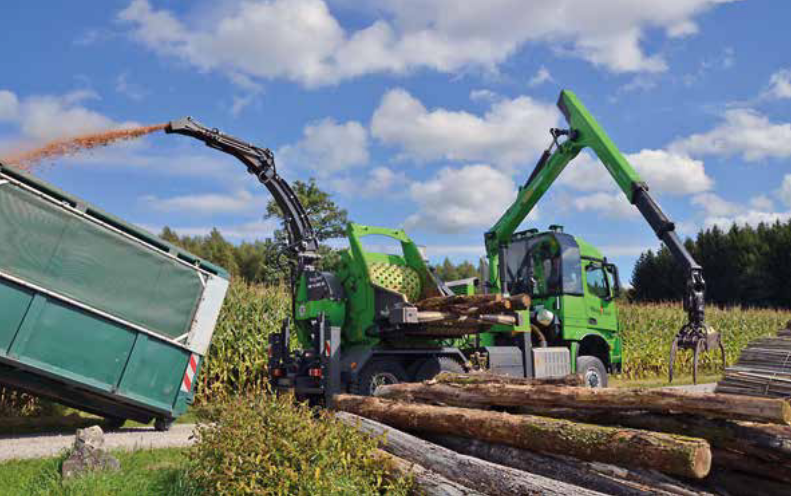 Among the main novelties that the new HEIZOMAT Heizohack HM 14-860 KL chipper truck incorporates are the two rear seats of the vehicle for direct control of the chipping function, to which is added the driver's seat. “The truck can be driven from the chipping seat, which facilitates the work of the professional, who can carry out both functions, using a simple joystick”, points out Gregor Baer, ​​director of HEIZOMAT Spain.

Already in the chipping area, the vehicle incorporates a log splitter. Its use is recommended when the diameter of the logs exceeds 65 centimeters. However, when the logs are short, they can be shredded directly, even with a diameter greater than 80 cm.

The vehicle incorporates balloon tires (6 × 6), which allow access to wet terrain without having too much pressure. The diesel tank has a capacity of 500 liters. Enough for a full day of chipping.

The LED type lighting offers the operator almost solar light, while driving and shredding the wood. The truck is reinforced with some wear plates, extremely hard and resistant in themselves. In addition, the entire transparent area in the cabin is not made of glass, but of polycarbonate, which guarantees the operator absolute safety.

The vehicle also has a reversible cooling system. Every 45 minutes, the fan blades reverse, cleaning all radiators. A function that, if desired, can also be performed manually.

In the bush, the operator can advance and move to another location without stopping the chipper rotor, saving considerable time. The rotor diameter is 650 millimeters. Direct access to the crankshaft enables the truck's 530 HP of power to be put at the service of the chipper.

Internaco Green Space will present this new truck with chipper at Expobiomasa.

Noticias relacionadas
FRAVIZEL presents its new equipment to take advantage of stumps at EXPOBIOMASA 2021
Comercial de Suministros presents at Expobiomasa the new fully electric chipper ideal for a more ecological and comfortable work with zero emissions.
HAMMEL Recyclingtechnik GmbH presents a new generation of biomass crushers at EXPOBIOMASA 2021
Related exhibitors
Our Exhibitors
More than 500 exhibitors will present the latest developments, products and technologies available in the international market.
Know them